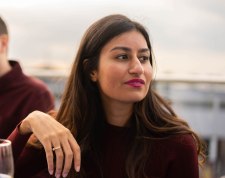 Alyssa Jaffer is the Social Media Marketing Manager at QS Quacquarelli Symonds, the world’s largest international higher education network, connecting universities, business schools and students, and publisher of the QS World University Rankings®. She earned her Master’s in International Journalism from City, University of London, with a post-graduate background in Islamic Studies. Prior to joining QS, Alyssa worked in digital marketing for start-ups and scale-ups in London. She graduated from the University of California, Berkeley in the Fall of 2012 in Media Studies. Alyssa has worked as the investigative Reporter in Residence at the UC Berkeley Investigative Reporting Program, where she worked on award-winning PBS Frontline documentaries Rape in the Fields and Rape on the Night Shift, both of which exposed the sexual harassment of undocumented Latinas in the workplace, and eventually led to California state legislature to prevent these crimes.

Alyssa has worked as a freelance journalist and on the editorial staff at San Francisco Magazine. Her writing has been featured on SanFranMag.com and in the print issue, as well as in Sphere magazine, SF Weekly, East Bay Express, Berkeley Patch, Ismaili USA Magazine and Portland Monthly Magazine.